Pantheon has recently completed drilling of the Theta West#1 well, confirming the discovery of light sweet crude oil, which will now be subject to an extensive production testing operations. Theta West is Pantheon’s largest appraisal project, which the Company believes has the potential to be one of the largest hydrocarbon pore volume plays currently being exploited on the ANS outside of the giant Prudhoe Bay Oilfield. This type of geological play and its volumetric size, if successful, is comparable to deepwater offshore Gulf of Mexico, West Africa and recent discoveries offshore Guyana. It is defined as a giant Basin Floor Fan with multibillion barrel oil potential. 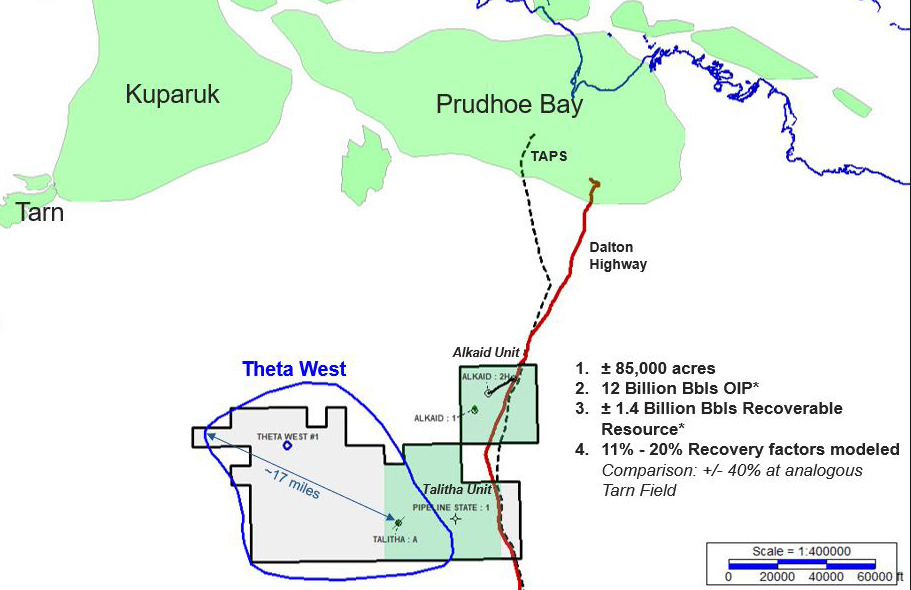 Pantheon recognised this large geological play several years ago and leveraged its proprietary 3D seismic and analytical methodologies over the past few years to strategically secure a dominant position in the Theta West play fairway, prior to the drilling of Talitha #A in 2021. The drilling of Talitha #A confirmed the Theta West structure as oil bearing on the distil flanks of the field which was followed up with the recent Theta West #1 appraisal well structurally higher i.e., “up dip” in a better geologic location some 10.5 miles from Talitha.  There are currently three wells that have penetrated and encountered oil in the Basin Floor Fan (“BFF”) complex - Pipeline State #1, Talitha #1 and Theta West #1.

The Theta West #1 reached a total depth at 8,450 feet (“ft”) having drilled through both the Upper Basin Floor Fan ("UBFF") and Lower Basin Floor Fan ("LBFF") target horizons, which are both Brookian age, and having encountered approximately 1,160 gross ft of hydrocarbon bearing reservoir across both horizons combined. Data received so far suggests the reservoir quality to be superior to the downdip Talitha #A, with high quality light oil encountered across the entire section.

The UBFF was encountered between 6,800 and 7,000 ft, and the LBFF was encountered between 7,450 and 8,410 ft depth. The top of the UBFF is located approximately 150 ft higher than pre-drill estimates. Well bore conditions in the shallower sections above the primary objective, combined with the extremely cold weather, have prevented the Company from conducting wireline operations in the open hole. However, the Company undertook Logging While Drilling ("LWD") operations which included resistivity, gamma ray, neutron density, formation density along with gas chromatography readings during drilling, which has provided excellent quality data, indicating the presence of hydrocarbons in the targeted horizons some 1,500 ft structurally higher (updip) from the Talitha #A well, 10.5 miles to the southeast.

Samples analysed to date by AHS/Baker Hughes, who were contracted to undertake Volatiles Analyses ("VAS"), has also confirmed the presence of light oil within the UBFF and the top portion of the LBFF, consistent with the LWD data. AHS/Baker Hughes is yet to complete analysis of the lower portion of the LBFF. Company estimates of the resource potential of Theta West #A (pre-drill) on a 100% basis were 12.1 billion barrels of Oil in Place and a P50 Contingent Resource (Recoverable) of 1.41 billion barrels of oil on Pantheon’s acreage as a most likely case under primary recovery. This will be reviewed and updated post the testing operation and more detailed evaluation.

The Theta West BFF was also penetrated in the Pipeline State #1 well drilled in 1988, substantially downdip from Talitha #A, and was also oil bearing. The Talitha #A well penetrated the two separate reservoirs within the BFF in a structurally down dip location, over eight miles from the crest of the trap to the northwest. At the Talitha #A site, the LBFF is 600 ft thick with approximately 50% net sand to gross rock interval ratio. The LBFF was successfully tested at Talitha #A where three separate 10 ft intervals were perforated over 370 ft out of 600 ft of gross section, at 9405 to 9415 ft, 9205 to 9215 ft and 9045 to 9055 ft. These three intervals were individually stimulated and flow tested, producing high quality c. 35 to 39 degree API oil and averaging 73 barrels of oil per day over a three day test period, before flowing at a sustained rate of approximately 40 BOPD on the final day of testing.

As predicted, the current Theta West #1 well reservoir target interval was substantially thicker at its (updip) crest and substantially shallower in depth than at Talitha #A with increased porosity and permeability. The shallow drilling location of Theta West presents a simple low-cost drilling operation for a major resource. The Theta West project covers approximately 100,000 acres controlled by Pantheon. Theta West represents a major opportunity for Pantheon to pursue the appraisal and development of what management believes  is a truly world class project in an excellent location. 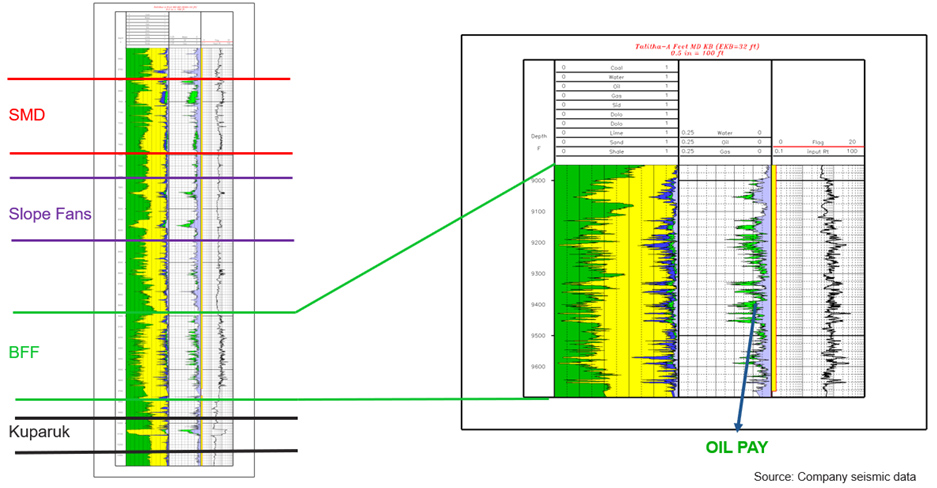 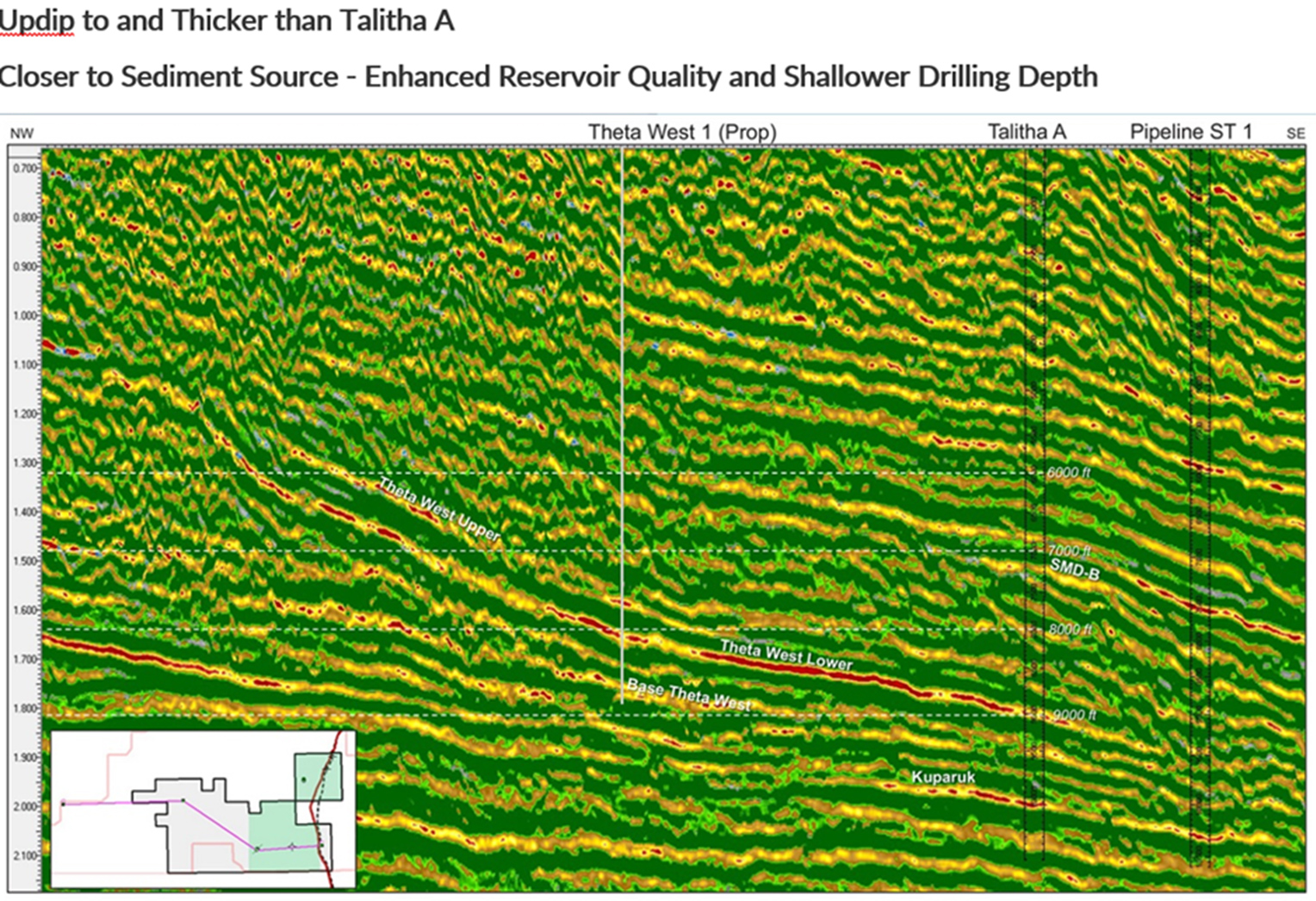 The Theta West BFF is part of the Brookian deepwater fan systems, which include the Slope Fan system, and lie below the Shelf Margin Deltaic and above the Kuparuk Formation in depth, all of which were proven as oil-bearing in the discovery well at Talitha #A and Pipeline State #1. The original interpretation was that this was a series of discrete fan systems, however, more recent analysis has indicated that the fan systems previously identified as discrete pay zones could, in fact, be part of one large continuous section that extends several thousand feet and has the potential to lie within a “super trap”.